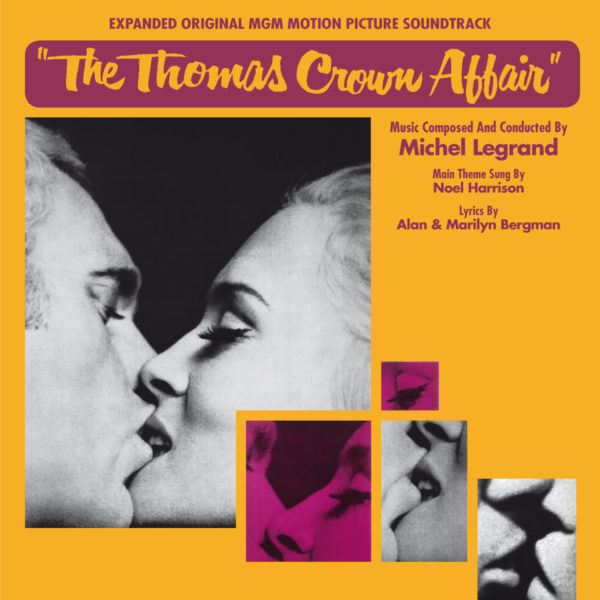 Quartet Records and MGM are proud to present the world premiere release of Michel Legrand’s complete original soundtrack from the highly sophisticated 1968 thriller The Thomas Crown Affair, the story of a Boston millionaire who puts together an insurance scam by committing holdups against himself.

Brilliantly directed by Norman Jewison (Fiddler on the Roof, In the Heat of the Night, The Cincinnati Kid), and starring Steve McQueen and Faye Dunaway, the film enjoyed great critical and commercial success and has become an icon of sixties style—known for its agile and surprising editing (by Hal Ashby), Pablo Ferro’s designs, the hot chemistry between Dunaway and McQueen, the costumes, and, of course, the music.

Having just moved to Los Angeles after the success of The Umbrellas of Cherbourg, Michel Legrand (The Young Girls of Rochefort, Summer of ’42, Yentl, Never Say Never Again), infused his music with a new, fresh and never-before-heard style, mixing influences of jazz, pop, Baroque and Stravinsky. It was sophisticated and chic—and worked perfectly with the film.

Legrand also composed (along with Alan & Marilyn Bergman) the beautiful song “The Windmills of Your Mind”—a song that immediately became a classic, with countless recorded versions around the world.  It won Legrand and the Bergmans the Academy Award for Best Original Song (the composer was also nominated for Best Original Score).

The music was recorded in Los Angeles, with Michel Legrand conducting a great group of musicians—including Ray Brown and Shelly Manne in the rhythm section, Louise DiTullio on flute, Bud Shank on alto saxophone, Vincent DeRosa on horn, etc. When the film and the song became a success, United Artists naturally decided to release an album, but as was common with soundtrack LPs of the era, they opted for a re-recording with new arrangements that made for a supposedly more pleasant listening experience. Legrand beautifully arranged his material and re-recorded the music in France. The LP—a masterpiece in terms of its arrangements, sound and production—was a huge success, repeatedly re-released until today. The album was first issued on CD in the nineties by Ryko; it was later reissued by Varèse Sarabande and a couple of times in Japan, but the original film recording has never before been released—until now.

This CD contains the remastered album presentation (with much-improved sound) plus the entire original recording presented from mono elements, courtesy of MGM. The package includes a 16-page full-color booklet with liner notes by Legrand biographer Stéphane Lerouge, including quotes from the composer, Norman Jewison, Alan & Marilyn Bergman and Alexandre Desplat.

The ultimate presentation of a score that defines the essence of the elegant and sophisticated sound of the sixties. The cool essence!