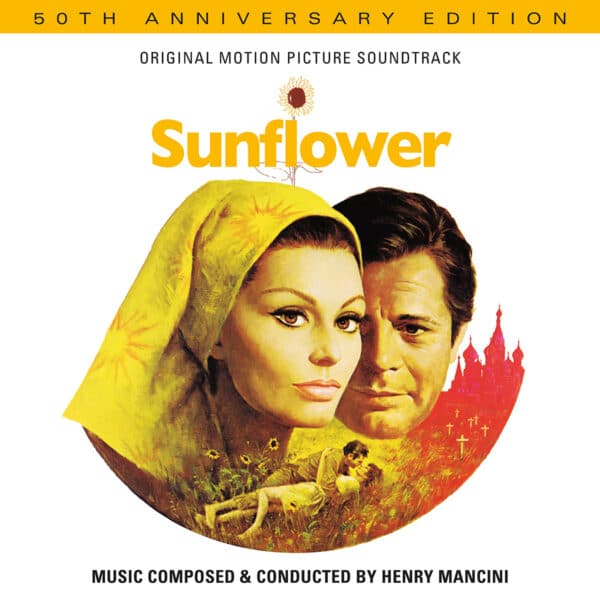 The film is set mostly in the wake of World War II, and follows an Italian woman named Giovanna (Sophia Loren) as she searches across Russia for any trace of her vanished husband, Antonio (Marcello Mastroianni). What she discovers will change her life forever.

At the time he was asked to score SUNFLOWER, Henry Mancini (1924–1994) was already a film music legend. His unforgettable melodies for directors Blake Edwards and Stanley Donen had brought him international renown. For this film, Mancini produced one of his most beautiful and dramatic scores. Its twin love themes, capturing the rich flavors of both Italy and Russia, are exquisitely balanced between romantic longing and painful melancholy, while powerful themes for the characters’ journeys add depth and pathos. SUNFLOWER earned Mancini an Academy Award nomination for Best Music, Original Score, and inspired the hit song “Loss of Love,” with lyrics by Bob Merrill. It was especially successful in Japan, where Mancini’s celebrity rose to new heights.

The LP issued at the time of SUNFLOWER’S release was an incredible success, and has been reissued several times on CD (though always in Japan). Quartet Records issued the premiere release of the complete score in 2013 on a 2-CD set, with the remastered stereo album on disc one, while the second disc featured the complete score from the original recording that Mancini made at RCA Studios in Rome. Although that disc featured every note written by the composer for the film (including several cues that ultimately were not used in the final cut), the session tapes had been preserved only in mono sound. This new edition has been produced, restored and mastered by Chris Malone, and because the LP stereo program derived from the original film recording, we have included it first on our CD and added all the additional music composed by Mancini that was not on the LP to make a 70-minute CD, without the need to repeat the same cues in stereo and mono.