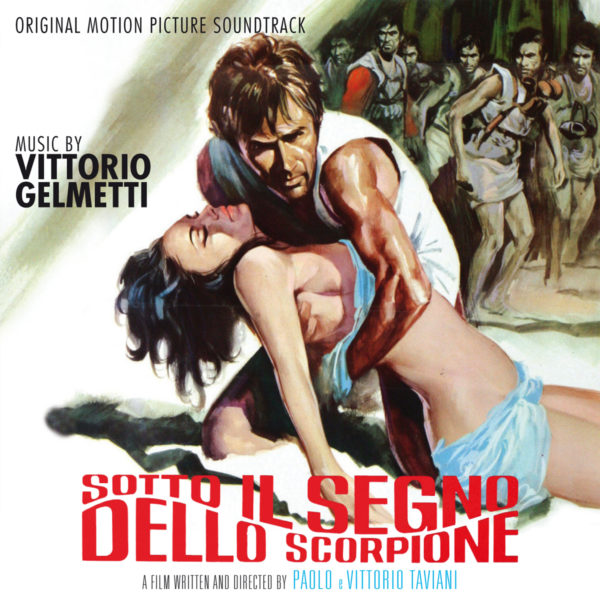 Directed by Vittorio and Paolo Taviani, the film takes place in a kind of fantastic prehistoric time when volcanos ravage and wipe entire civilizations off the face of the earth. When an island gets buried under lava and ash, a group of survivors manages to get away and reach a nearby island where they come across another tribe. The two clans don’t seem to get along as the newcomers engage in weird rituals and are just a general nuisance for the natives. While there is a more important goal to be achieved as the travelers try to convince their new mates to travel to the much safer mainland, the contact between two civilizations soon ends in violence, beatings and hogtied women…

Scoring for Sotto il segno dello scorpione posed a special challenge for Vittorio Gelmetti as he had to create music for a fictional prehistoric society—that is, he had to write music for a period that required a historical perspective yet had no known musical culture. Instead of looking back to the past of banging rocks and sticks together, Gelmetti looked forward to the future, where innovative electronic solutions, atonal symphonic elements and the haunting vocals of the Nora Orlandi choir could easily comingle. The gradual breakdown of communication between the two clans is underscored with a whimsical twist on contemporary concert music, whose raw energy is harvested to pile upon the conflict-heavy interactions of the cavemen.

While three mono tracks of the score were previously released on a contemporary EP, this is the first-ever complete release of this engaging, experimental score in full stereo, mastered by Claudio Fuiano from first-generation master tapes vaulted at Gruppo Sugar. Eight-page, full-color booklet includes liner notes by Gergely Hubai, discussing the film, the composer and the score.