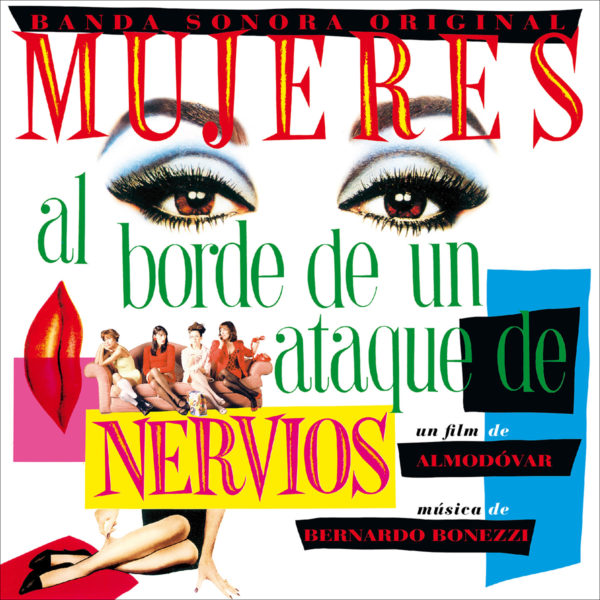 Written and directed by Pedro Almodóvar in 1988 and starring Carmen Maura, Antonio Banderas, María Barranco, Rossy de Palma, Chus Lampreave and Fernando Guillén, the film is about a dubbing actress who encounters a variety of eccentric characters after embarking on a journey to discover why her lover abruptly left her. Hugely successful at the worldwide box office, the film was an Academy-Award nominee for Best Foreign Language Film.

The music was composed by Bernardo Bonezzi (Sin noticias de Dios, Mari del Sud, ¿Qué he hecho yo para merecer esto!), Almodóvar’s usual composer during his first period. Far from a comedy score, Bonezzi’s music accompanies and envelops the character of Pepa (Carmen Maura) in the difficult moments that thread through the film as she searches for the lover who has abandoned her when he discovers she is pregnant. Bonezzi acknowledged it was a tribute to Bernard Herrmann and the Frank Skinner scores for the films of Douglas Sirk; it also includes a fun homage to Planet of the Apes by Jerry Goldsmith.

A selection of seven cues was included in the compilation “3 Films by Almodóvar” (Tabu Records) and “Almodóvar Early Films” (Silva Screen), but the official original soundtrack was never released. Now, we are proud to present the Bonezzi score in its entirety, mastered from the original tapes. The album also includes the key songs that open and close the film: “Soy infeliz” performed by Lola Beltrán, and the famous “Puro Teatro” by La Lupe.