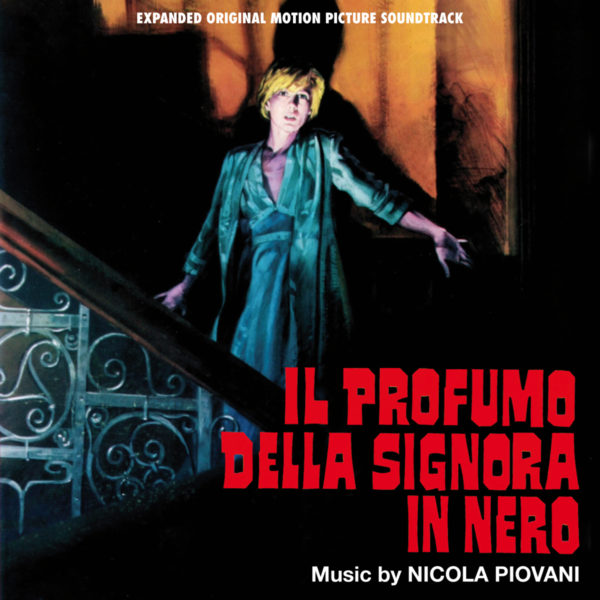 Complete CD edition of Nicola Piovani’s only and unusual approach to the giallo.

Written and directed by Francesco Barilli, Il profumo della signora in nero (The Perfume of the Lady in Black) is one of most bizarre Italian giallo films of the 1970s. Starring American actress Mimsy Farmer, the film tells the story of Silvia Hacherman, an industrial chemist who tries to escape from her troubled past. A series of musical and visual cues trigger terrifying visions as Silvia becomes the focus of a series of murders inspired by Lewis Carroll’s Alice in Wonderland…

The music for The Perfume of the Lady in Black is composed by Nicola Piovani whose approach to the score recalls the film’s main influence, Rosemary’s Baby. A simple, haunting lullaby plays an almost Hitchcockian role in solving the mystery: it is eventually identified as the theme played by Silvia’s favorite toy from her childhood. The arrangements range from the original music box version to a demented carnivalesque take and everything in-between. A piece by Mozart is also included in the program.

Beat Records released a single with two cues in 1974, and eight tracks of the score was previously released on CD by Beat Records in the mid-nineties. In 2014, an LP version by Death Waltz was issued as part of a Record Store Day campaign. This release by Quartet Records expands the program to include for the first time the complete score. Mastered by Enrico De Gemini, the package includes a 8-page booklet with liner notes by Gergely Hubai, who discuss the film, the composer and the score.