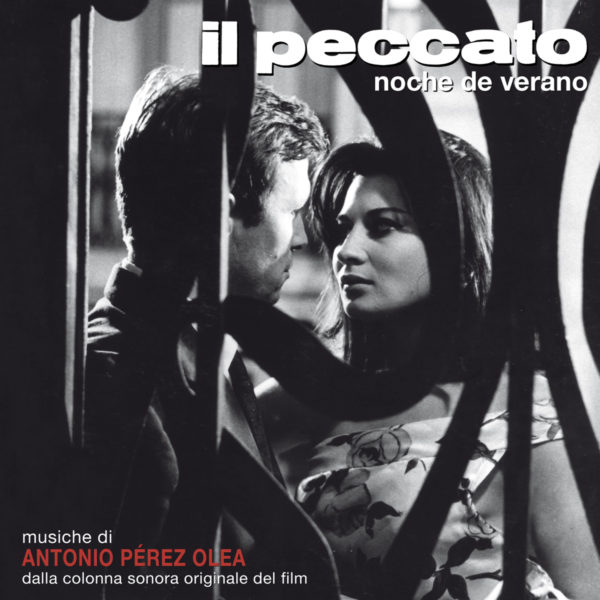 Jordi Grau’s first feature film, shot in glorious black and white in 1962, this Spanish-Italian coproduction is in many ways related to Antonioni’s “La Notte”. Both films speak about the impairing ability to communicate as well as the desire and impossibility to establish a relationship, and a party as background scenery.

Where Antonioni’s film depicts a luxurious party in Milan, Grau’s version portraits the gathering of several characters with no expectations on the night of the sommer solistice in Barcelona.

As was the case for Giorgio Gaslini with “La Notte”, “Il Peccato” marks composer Antonio Pérez Olea first film work. Along the same lines, Pérez Olea was also faced with the task to write the music while the filming was going on, trying to accommodate unexpected changes in the script. The music exudes a visible Barcelona style, combining swing, bee-bop, jazz, folk and ballroom dancing, but yet again it isn’t simply source music but a score with a strong and distinctive personality.

After releasing “Historia de una chica sola” and “The Living Dead at the Manchester Morgue”, it is a privilege for Quartet Records to release once again the original score to one of Jordi Grau’s film, especially since it’s Maestro Antonio Peréz Olea CD debut. He was Jordi Grau’s composer-of-choice on several films and so they both established one of the most cosolidated director-composer relationship in Spain over the 60’s and 70’s.

Using the original tapes property of CAM in Italy and with the same content as the original 1962 LP, the score has been carefully remastered and included a 20-pages booklet full of stills and liner notes by Jordi Grau and Miguel Ángel Barroso.