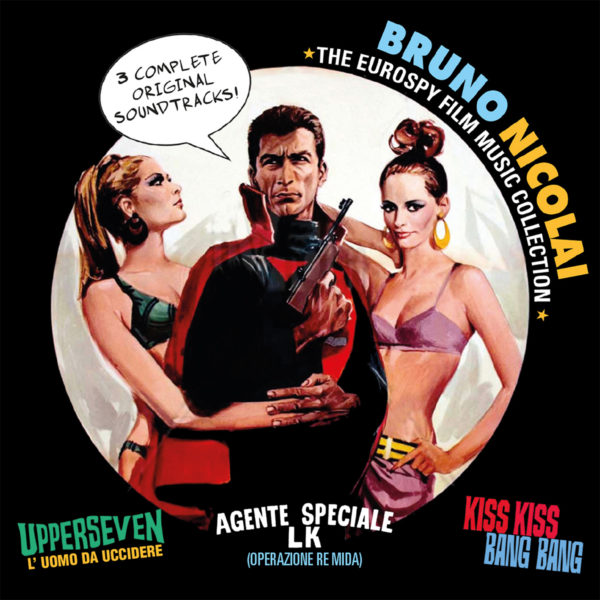 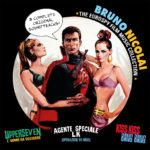 Quartet Records and GDM are proud to present a mammoth 3-CD set with the complete, remastered edition of scores by the great Bruno Nicolai from three of the most renowned and lovely mid-sixties Eurospy movies.

Upperseven: L’uomo da uccidere (1966) was directed by Alberto De Martino and starred Paul Hubschmid and Karin Dor. The film is an ambitious spy adventure that captures some of the scope of the Bond films. Bruno Nicolai wrote an energetic, memorable, melodic score, recalling music written for the genre by Barry, Mancini and Schifrin. Despite the popularity of the film, the album wasn’t released in 1966. The music was released for the first time in 1997 on a now hard-to-find and very expensive Japanese CD. The CD omitted the beautiful “Main Title” song played by Paola Orlandi, since it could not be found on the master tapes. We are happy to include the song in this box-set for the first time, taken from the film’s mono music stem.

Kiss Kiss Bang Bang (1966) directed by Duccio Tessari and starring Giuliano Gemma and Lorella De Luca, features an infectious score with three main themes and a catchy song, all submitted to a lot of fun and exciting versions, ranging from a waltz to a Baroque-style treatment and the musical style of 007. Although at the time of the film’s release the Italian label Parade issued only a 45-RPM EP disc, the Japanese label SLC released a CD with 52 minutes of the score in 1997. The Japanese label Volcano issued a 58-minute CD with the score “almost” complete in 2000. Around three minutes went unreleased, but they have been included in this box-set.

Agente Speciale LK (1967), directed by long-time Nicolai collaborator Jess Franco, starred Ray Danton and Barbara Bold. The “pulp” comic tone of the film inspired Nicolai to write a fun, varied and unbridled score that ranges from sophisticated jazz and psychedelic sounds to a parody of Bond scores. The soundtrack album was released for the first time by the German label Lucertola in 1997, and reissued with some bonus tracks in 1999 by Dagored in Italy. This is the first time the score has been presented in its entirety.